The replacement fillet arrived in mid April. This one fitted much better, which they tend to do when you don’t attack them with hacksaws.

I got to work fitting the wiper wheel boxes which, frankly, is a bit of a faff. Got there in the end but much trimming of the rubber pipes the spindle goes through was required.

Then I noticed something odd… 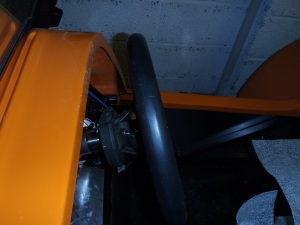 Oops! I think my measurements must have been off slightly! The column is supported by an exhaust clamp rather than the standard Mazda mounts and must not have centralised the bracket for that properly. Not a hard job to knock a new one up. It looks like the column has shrunk slightly having the new spline welded on to it, so I may have a fairly hefty hole in the dash for the steering boss rather than just the column. I think I’ll buy a sacrificial dash rather than cut a hole that big in my carbon one straight away. Or I could get the column lengthened slightly.

So, when will the car be ready? To be honest, I’m enjoying the build more now I’m not pushing to get it ready. I’ll send the IVA paperwork off for an ASAP date once the engine is running I expect. Not far to go for that, seal the sump, fit the exhaust and fill the coolant. This weekend? Maybe, but I won’t rush for it.