I dropped the car off at Basset Down Balancing (www.bassetdownbalancing.co.uk) after the IVA and picked it up just over a couple of weeks later. During that time, it was having the sump lowered and widened.

Cast your minds back a few months and you’ll remember the ground clearance once the engine was fitted.

Air under the sump was certainly at a premium and until I raised the suspension a silly amount it was scraping just getting it on and off the drive.

Most who build the MX5 SDV simply chop out a section from the middle and weld it back up to increase the clearance. Obviously the pickup pipe is also shortened an appropriate amount. At a guess the disadvantages of this is reducing the overall capacity and indeed the reservoir to hold the oil under heavy braking. Of course, not being a motorsport engineer in any way shape or form I could be wrong but with the oil pickup being at the back of the sump I wonder if you could get some form of starvation under heavy braking with the oil rushing forward. Maybe I’d be more impressed in a Westfield that produces that kind of braking force!

Anyway, chatting with Andy at Basset Down Balancing we came up with an alternative solution – dramatically altering the standard sump: 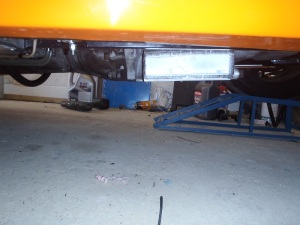 So, the profile of the sump is reduced to make it flush with the gearbox and crucially higher than the transmission hoop. You can see the original part of the sump in front of the new box section.

I think the last photo shows it best. Capacity has been increased slightly and it’s baffled inside. No photo unfortunately, it was being refitting just as I arrived!