Ok, it’s not quite the end of the year but I’ve just declared the Westfield SORN so it might as well be. Not necessarily the fault of the Westfield mind – I’ve just got some jobs to do on the Land Rover and that parks in front of the garage so may as well SORN them both.  For the non-UK readers, SORN is where you declare the car off the road and so can stop paying tax for it.

So what a year its been! I’ve definitely spent more time tinkering with it than I have driving it, completing two pretty major engine projects. They’re both at odds with each other really, but given the choice I’d still do them both again. I learned a fair amount and its quite pleasing to knock something up in the garage then see how it performs on the road and track.

The engine build and throttle bodies was a real confidence boost for me. I was advised that it would be a bit pointless and cams/headwork was the way to go, but I couldn’t see how the throttle bodies wouldn’t add any power so just had to give it a go myself. I wasn’t brave enough to sink a couple of thousand pounds into a Jenvey kit so the idea of essentially prototyping it first with a set of motorbike throttle bodies really appealed. In the end, netting ~165bhp when the cam/headwork kit didn’t achieve that was a real bonus. I still wonder how much of that was due to the throttle bodies and how much due to the Mk2.5/Mk2 combination plus maybe a bit of luck in having a decent engine.

And of course, the noise…

Ok yes, I should have kept the throttle bodies on for longer. It would have been interesting to see how the engine responded to a set of uprated cams and a higher rev limit. Granted neither of those modifications would have been useful for the turbo conversion, but interesting all the same. As it is, all I miss is the noise… and another aspect that I’ll come on to later.

I kept the turbo project pretty quiet (which is exactly how it turned out). I knew it could be done. Firstly, people have been turbocharging MX5/Miatas for donkeys years. Secondly, both Flyin Miata and a Belgian guy called Frank have managed to fit the Mazdaspeed kit to Westfields. Both LHD too which is probably more challenging. I’d keep coming back to the turbo idea whilst forming my tuning plans but would always dismiss it as I could never find a Mazdaspeed turbo manifold, and all the aftermarket ones looked like they’d never fit. In the end, an innocent question to a well known supplier of turbo manifolds for the MX5/Miatas quickly spiralled from wondering if he could make a copy of the manifold to having a manifold and downpipe kit land on my door mat. I still can’t believe that some measurements taken with a tape measure and photoshopped onto an image of my engine bay can result in a kit being made the other side of Europe that would fit without modification.

It wasn’t even close to not fitting. To top it all off, not only did the project go surprisingly well, it exceeded all expectations when it came to power and delivery. 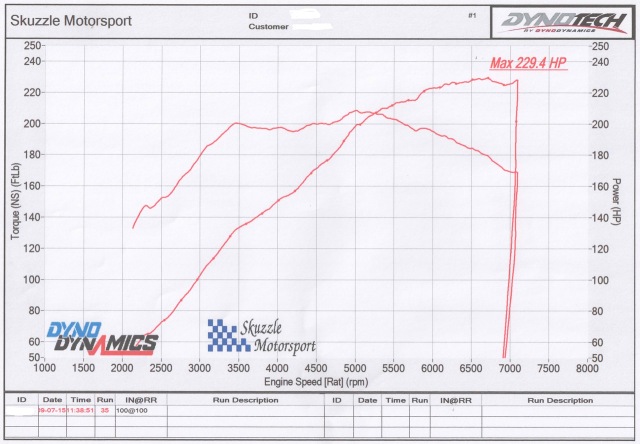 At the wheels. For what I’ve done, that’s a strong figure. Perhaps it is a case of a strong engine helping on the power front. The way it drives is baffling at times. It seems you can put your foot down in any gear at any rpm and it will just build speed relentlessly. This is great, but also perhaps a bit of a curse. I was reminded whilst watching the throttle body sound comparison video posted above. On those videos I’m braking well past the brake board. I did Hullavington again in October, and I was braking at the brake board. Ok, I’m arriving at places with significantly more speed, but my confidence on the brakes just isn’t there any more. For a while I wasn’t even confident around the corners, like I was scared of what I’d built. Perhaps I just need to adjust, or maybe I truly have created a monster? Needs analysing…

Immediately you can see the gear change come in earlier. Rev limit hasn’t been changed, so that’s a conscious decision for whatever reason. Probably arriving at the rev limit quicker. You can also see how much quicker it builds speed, changing into 5th which I never had to before. I end up braking around 60m earlier but otherwise decelerate to the same speed where I was braking before. I corner slower, but that corner was tighter than last time I’m sure! The next section is telling – this time with the turbo I would practically coast around a few corners, where as before I was accelerating right up to them. You can see a short shift in the red line. A confidence lift coming out of that section but soon overcome the speed difference compared to April. Brake earlier and softer initially, but after that it’s largely the same just with additional straight line speed.

I didn’t make a post about Hullavington for two reason. The first and foremost is because my GoPro broke the night before and that really annoyed me. Expensive bits of kit to break in just 2 years. The second is that I didn’t enjoy it that much. I enjoyed it, but not massively. The main reason for this it I kept popping off a boost hose, usually on the outlap or second lap. I’ve fixed it now of course, but with limited tools (and being next to a hot turbo) I couldn’t make a lasting fix in the paddock area. I also discovered that the clutch was unappreciative of my new found power and would slip with the faster gear changes. Change gear at a ‘road speed’ and it was fine, but hammer it home and it wouldn’t play ball. Uprated clutch required this winter, and perhaps a lighter flywheel whilst I’m at it. The gearbox also leaked oil, perhaps a sign of it getting too hot but it wasn’t that warm a day and was impeccable during the summer track day.

So, in all a very productive year and I can’t wait to get back out on track and try and get on top of the car again. Just a few sensible maintenance type projects for this winter. Clutch and flywheel, check the brake wear and may need a new set of track tyres. For non-maintenance stuff, I’m tempted to increase the diameter of the exhaust to make it 2.75″ from turbo back. It currently reduces to 2″. I’m hoping that will help with some extra noise.

This entry was posted in Uncategorized. Bookmark the permalink.