A bit of a delay with this. I’ve been waiting for Westfield to send out some 4.5″ bolts and spacers for the buffers on the rear diff. Well technically they’ve done that so I’ve been waiting for the postman to deliver them. The postal system still hasn’t given them up so I bought some more bolts and decided to make the spacers myself. I also picked up an M6x35mm bolt for the brake pressure switch. Then managed to lose a washer for it in the process.

Anyway, rear diff fitting. First up, the brackets for the arms of the diff. The drivers side fitted without too much argument, but the passenger side was horrible. It required a lot of jiggling around, loosening one side, tightening the other until the holes vaguely lined up. Then, slide the last bolt through and tighten the lot!

With that done, onto protection for the chassis. Fortunately, the wood Westfield use package the fuel lines seemed just right and so that got chopped up and taped to the chassis.

Onto the spacers, and I’ve finally found a use for the original spacer in the front of the diff. I thought that as that was an M12 bolt in there, the spacer should be the right thickness. I called Westfield technical to ask what length it should be. Unfortunately they didn’t know off hand, so I fitted it in full length then measured how much needed to be chopped off.

The diff was bolted in loosely at first until every bolt was in, then it could be tightened. The top of the front bracket proved most entertaining, requiring the removal of the brake pipes in this area.

The bolts were then tightened up, requiring much less expletives that the brackets before hand.

With the diff fitted, the uprights/driveshafts (and thus rear shocks) could be done. For the 1.8 (at least with the open diff) the driveshafts slide in rather than bolt in. They’re secured with circlips instead. Circlips that have to be of a certain size it turns out. The specifications state they shouldn’t be larger than 28mm, and I think on removal one of them was deformed. The passenger side goes in without any fuss, but the drivers side just didn’t want to play ball. I’ve ordered a new clip from Mazda, but they’re on backorder so likely to take 5 days to get in. I guess the chassis won’t be making it to the floor this week. Never mind, still around 4 weeks until I pick up the completion kit anyway.

I also remembered the cover for the inertia seat belt reels. Now, I’m not going for the standard seat belts and instead fitting four point harnesses. Cleverly, I thought this meant I could fit the cover now rather than removing the diff later.

Less than clever of course, if there’s no reels I don’t need to cover them. I thus justified it because it looks tidy, but in reality it won’t be seen.

So that’s it on the diff front for now, at least until the clip arrives. Other jobs to do include:

And on the engine front, the head has been skimmed and rebuilt 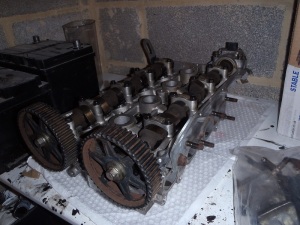 It only needed one pass, so I guess it wasn’t really warped. I’ve checked the block and that seems perfectly flat. I guess it was either a dodgy gasket then or a problem with fitting. Either way, confidence inspired that it shouldn’t leak when it all goes back together.