Lots of little jobs done recently. Including drilling the sump for the turbo oil return. Some of the MX5 guys swear that by blowing air through the oil filler cap you can drill the sump in situ without worrying about swarf. I’m not convinced, so I removed it first. Not without checking where the hole should go mind.

Removal was a mission in itself, with two bolts being handily boxed in by the drivers side engine mount and the wings of the sump:

I had to support the engine on a trolley jack, remove that engine mount, remove those two bolts, refit the engine mount and then carry on. It wasn’t too bad, once I’d remembered the bellhousing bolts. Refitting is going to be a pain though.

With the sump off I had a look at where I had marked to drill.

I thought it was a bit high, by the time the hole had been drilled it would have been quite close to the top. So I shifted it down a bit, and also more into the middle of the flat bit. Taking my brave pill, I proceeded to put a hole in my sump. 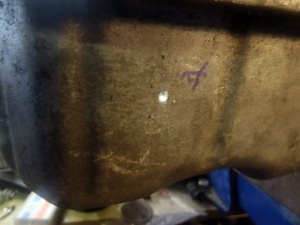 No turning back now, so I made the hole steadily bigger until it was 19mm, ready for tapping (1/2 bsp).

As expected, this had put a lot of swarf in my sump. In a bid to catch it, I’d lightly oiled a bit of tissue in the hope that most of the swarf would stick to it. Here it was after the first hole:

And after the last:

I definitely wouldn’t want to risk that by drilling without removing the sump.

I tapped the hole:

And attached the fitting, using threadlock resistant to oils: 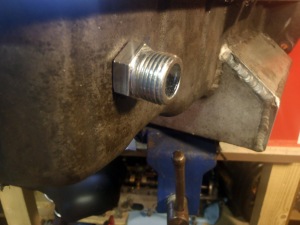 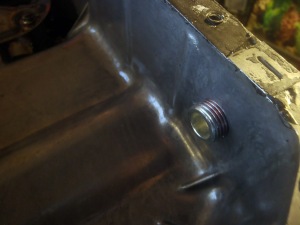 Theoretically, the threadlock should stop oil leaking through the threads, but just in case I’ll smear silicone sealant around the edges of the hole then fit a nut to hold it all in.

Another job done was to remove the throttle bodies, paint the standard inlet manifold and fit that. Before painting I removed the EGR pipe blank from my mk1 manifold and fitted that. I also found and EGR valve blank on a mk2 manifold I had lying around, so fitted that too.

I painted the inlet manifold grey and orange to match the engine, but it’s not turned out as well as I’d hoped. The curse of not planning ahead! The orange section on top of the manifold is supposed to house a sticker which I’ve not chosen yet, but the orange bracketry hasn’t worked well at all. Looks a bit… fisherprice…

Exhaust is booked in to be made next week. Should probably book mapping in soon too, perhaps for w/c 6th July. Hopefully that will allow enough time for the intercooler to arrive and get some hoses to connect it all up.