On Friday 15th July, at about 6pm the Mazda was parked in the garage for the final time. 145,657 miles after it rolled off the production line, it covered its last mile. Obviously, that was on the way to the garage, its not that big.

I wasn’t sad, happily. Sure, I’d had fun over the past 7 months but its going to get turned into something better. That and the clutch judder was really beginning to get on my nerves, I really must sort that whilst I’m breaking the car! 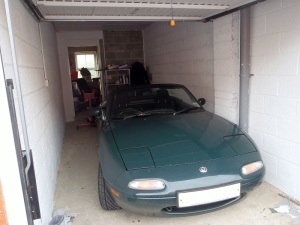 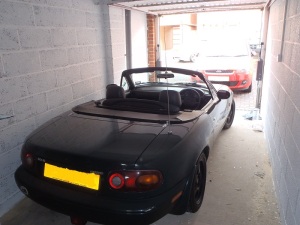 Having said all that, I’m still kinda hoping to find lots of rust when I take it apart to try and justify killing this particular one!

Anyway, as you can see, painting didn’t quite get finished. At the time of writing, I have done slightly more than the photos suggest but I’m still behind. Of course, with the car in the garage it does make it a touch more awkward. Annoyingly, it looks like Homebase has changed their paint and it’s now a bit thicker. If they’d have done this a few weeks ago I’d have needed a lot less coats!! Doh!

I put a thread up on MX5Nutz saying that the car was breaking and parts would be available. I decided to price things cheaper than what I was seeing on other for sale threads to try and get them moving quickly. Sure enough, I was inundated with PMs requesting various bits and pieces which took some keeping on top of! Not complaining of course!

First up someone was coming to collect the bootlid and some dash items on Sunday, so off they came. I also found a much easier way of removing the eyeball vents than the manual suggested so that was a bit lucky. They really are in there tight!

By close of play Sunday, the car was looking like this: 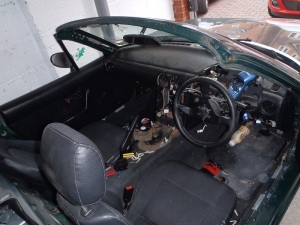 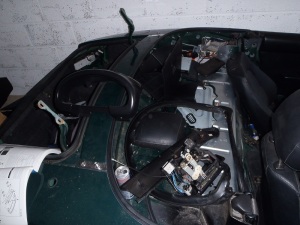 We’d removed a few dash bits, the boot lid and the roof mainly. Of course, what car breaking project wouldn’t be complete without getting your mate upsidedown in a footwell at some point? 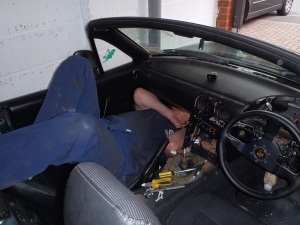 Fast forward to today, and after a couple more hours its looking like this. I’ve also managed to get a bit more painting done which is a bonus. Another coat on the ceiling then I reckon I’ll be able to get the light refitted. 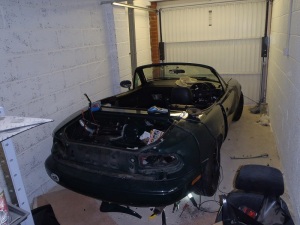 Tomorrow I think it’ll be up on axle stands, then off with the bumpers, drivers side wing and drivers side door. Back on the floor, turn it around then off with the passenger side wing and door. Then it can go into the middle and I should be able to finish off the interior and on with the underside. If I can achieve that, I should be a week ahead of plan and so afford some time to finish off the painting. Nice use of the word ‘if’ there of course!