The end result of the footwell panel was that it’s no longer part of the kit, so I had to purchase it at £15+VAT. I could have just used the flat metal panel supplied of course, but I’d much rather have the footrest and the space.

My brother fixed his air compressor, so I promptly stole it and started investing.

I really wish I’d invested in air tools at the start of the whole project, they just make like so much easier. My hands don’t hurt and the mere thought of riveting now! 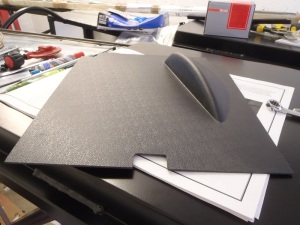 It’s not fibreglass like I was expecting, so almost worth then £18.

I remade the front pipe as threatened, and ended up with this:

Quite pleased with my effort, I had no idea the unsupported distance between the master cylinder and the chassis was too far. Yup, I’d be doing this pipe again. Again.

I ran out of p-clips whilst securing the fuel lines, so drilled the drivers side footwell panel, and fitted the passenger side. I left the drivers side off so I’d still have access to the pedals. 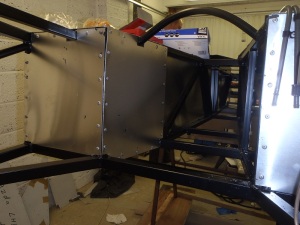 A couple of days later, the p-clips arrived and battle continued. I finished the drivers side pipework off, then made up the carbon canister pipe. This was easily the best pipe I made, shame I didn’t have pipe to practice on first!

Still a bit of tidying to be done, particularly with the brake pipe. I’ll replace some of the clips with p-clips for added security too.

The rear was much tidier: