It’s been a couple of weeks very much focused on painting! The temperature resistant calliper paint arrived so I started painting those. Unfortunately, the paint was far runnier than expected and it took 5 coats in the end. I took my time though and left the suggested 24 hours between coats. The final result isn’t perfect, but as long as it doesn’t melt I’m not too fussed. They’ll be hidden behind the wheels after all! 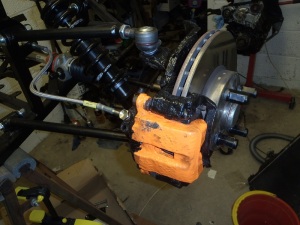 As you can see, it’s just the callipers I’ve painted orange, and even then only the front halves. I didn’t want them to stand out too much, hopefully they’ll look ok behind the wheels. If not, I can always paint the rest of them black!

The engine has also gotten some attention. I wanted to paint the raised lettering on the cam cover in orange with the rest being black. After much head scratching I painted the lettering and once dry started to mask it up ready for the rest. I wasn’t too confident in the masking though, it was quite fiddly so I decided I’d bite the bullet, paint over it then sand it back. As I painted over it I fortunately discovered I could merely wipe the paint off the orange bits – that made life nice and easy!

With the head back on, the block/head was painted black and reassembly started.

So far the water pump is back on, along with the oil pressure sender and oil cooler. The rocker cover will come off again to fit the cambelt, but I fitted it for now as I need the space on the bench to paint other bits. The exhaust manifold is currently drying and should go back on tomorrow. Then it’s the inlet manifold and all the little brackets dotted around.

In other news, I’ve paid for the rest of the completion kit and the collection should be on the 15th December. I need to get the engine in by then and the store room cleared. Chop chop!