Make sure you’re happy with the positioning of the tub before doing this, and remembering the an FW bonnet will mean the tub doesn’t use the 400mm measurement at the rear.

First, I masked up where I was going to drill through and added some tape to the sides to show where the plate the roll bar would mount to is. 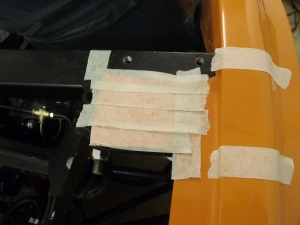 I then fitted the boot box, masking taped that up and placed the rollbar on top. After making sure all was central, I carefully drew around the rollbar and removed it. With a rule, I found the centre of these circles and drilled a 4mm hole through it down through the mounting plate.

I removed the boot box and using the 4mm hole as a guide, drilled a 54mm hole for the rollbar to pass through. I also started drilling through the tub afterwards, but it was getting a bit late and didn’t think the neighbours would appreciate it. There’s no rush, I haven’t picked up a 12mm drill bit yet and don’t want to fit the rollbar properly until I’m finished in the boot area.

Checking my handiwork, I was relieve to see it all still lined up: 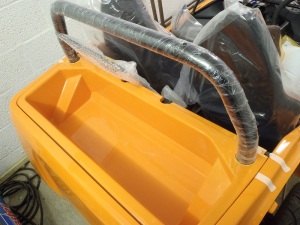 I don’t think the rollbar is up to much to be honest, so I’ll be upgrading to a braced one next winter. Will concentrate on getting it on the road first!