Bit of an anti-climax this job after removing the engine, but something else ticked off either way.

So that’s the throttle bodies in all their assembled glory. I started by removing the fuel rail and injectors. I’ll be using the standard MX5 injectors in the head. All the screws were undone without complaint apart from one, which just rounded off after looking at it the wrong way. That little problem was drilled out.

Then I removed some of the pipework leaving a relatively clean set of throttle bodies. 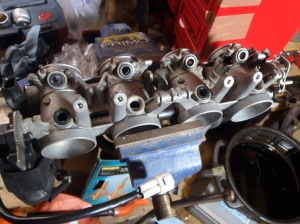 These are held on with tiny screws, but instead of being made of soft cheese, were apparently made of concrete. Indeed, the screwdriver that I found was the right size soon surrendered, leaving it’s head in one of the screws. All eight of them would get drilled out then… some more successfully than others but I didn’t photograph the bad ones! 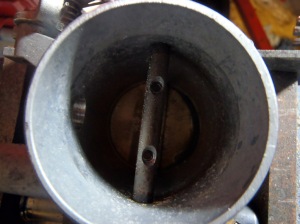 With the plates removed, the spindle was just held in by a couple of circlips. I removed the first: 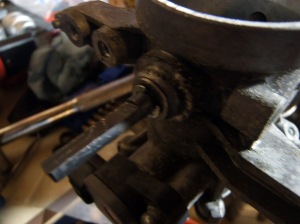 Then removed the two bolts holding the two sets of throttle bodies together. Sliding the first set off allowed me to see the other circlip.

With that removed, I had two pairs of throttle bodies ready for spacing.

Spacing looks like it will be a relatively simple affair. Just need a spacer and longer bolts to keep the distance between the two, then something to relink the two throttle spindles.

Of course, they now have many more holes in them than I need. For the most part, I think I’ll tap them and fit some bolts cut down to size. This seems more secure to me than using chemical metal or similar.

I’ll pick up the block and head next weekend, so in the meantime I need to work out what else I need to do before rebuilding the engine. Ordering a shed load of gaskets is one thing I guess!