Out with the old…

With the engine away for having the head and block refaced, it was time to bite the bullet and remove the current engine. Definitely committed to this project now!

Firstly, I removed the bonnet. Not a particularly light thing with the headlights still attached… I’m wondering if it’s heavier than the normal bonnet/nosecone. Theoretically not I guess. Anyway, with the bonnet removed, access is great.

I can’t wait to lose a lot of these wires and hoses! I started at the front, and removed the air filter whilst the coolant was draining.

The catch tank was next, then onto the exhaust. The silencer/link pipe took some persuading to let the manifold go – that was one part of the car that wasn’t going to fall off then at least. 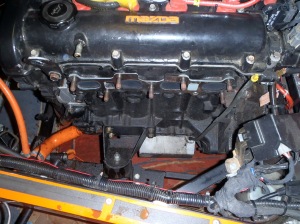 Finally, all the other little bits like the alternator, starter motor, engine mounts, fuel lines etc. When I refit the replacement engine, I’m definitely doing the inlet manifold last! It would have made life a lot easier if I’d removed the inlet manifold from this engine.

Ah well, it was eventually ready for removal and lifted out relatively easily. Getting it clear of the car wasn’t so easy though as I ran out of room to pull the engine crane backwards. I could have pulled the crane to the side a bit which would have done the trick, but the legs wouldn’t go under the wheel. Doh! Of course, I couldn’t undo the wheel because I hadn’t loosened the nuts off. So, strap the gearbox up (the jack was holding it up and I needed that), off the axle stands, loosen the nuts and back onto the axle stands. Wheel removed and I had all the space I needed. 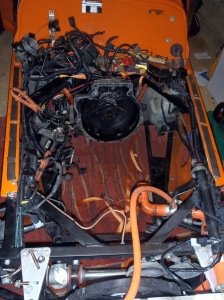 I really need to make a new loom – far more wires there than required!

Before I could bolt the engine to the engine stand I needed to remove the flywheel. When I removed the clutch it looked like the spigot bearing was leaking again. 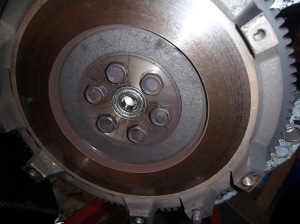 It’s different colour to last time though (pictured below) and the bearing is still smooth. It could well just be oil from the rear crank seal (which is weeping). Might as well replace it though, just in case.

I encountered a problem when trying to remove the flywheel bolts… securing the flywheel whilst the engine is in free air just doesn’t work spectacularly well. A quick call to Stuart and he was round with his impact gun which did the job without struggling. I definitely have to invest in one of those. I usually borrow my brother’s air one but in this case an electric one seems much more suited to the garage.

The engine was attached to the standard and is now ready to have the bits I need removing from it. 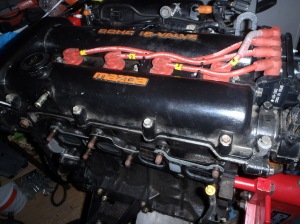