A few little jobs over the last few days, basically filling the time in between paint coats on a few bits and bobs.

First up was fitting all the timing belt covers. Whilst the bolts that I removed from the mk2.5 engine were in much better condition than those of the original engine, I saw a stainless set on eBay for about a fiver so ordered a set of them. Came with washers too. 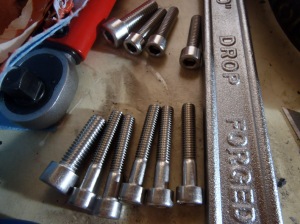 I merrily carried on, fitting the covers from the mk2.5 engine then hit a snag…

Ah. That will be because the mk2.5 has the VVT unit there and so a different rocker cover! Luckily I hadn’t thrown out the top cover from the mk2 engine so fitted that and all was well with the world. 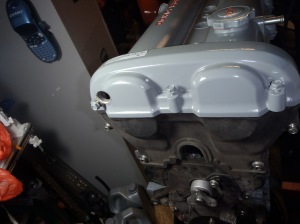 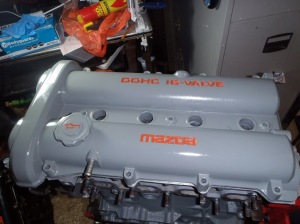 Then it was the turn of the pulleys. I’ve gone for orange, though think it photographs better than it looks. It’s not so bad considering I didn’t put much effort into prep.

I’m painting the thermostat housing and water pump inlet currently. In between coats of that I turned my attention to the inlet manifold. It looked like it was the bottom holes that were slightly out of line, so I drilled them out with a 9mm drill bit. This took a bare minimum out of the holes. It still didn’t fit, but felt closer. Closer inspection this time showed it was just one hole that was now slightly out, so I got the file out, taking a tiny bit off at a time and after 3 or 4 attempts it slid right on. 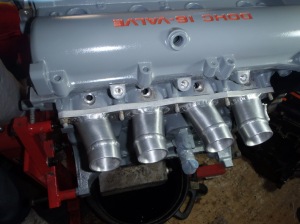 Looking down the inlet, it seems I could benefit from a spot of port matching, but it’s far too late in the day for that now! 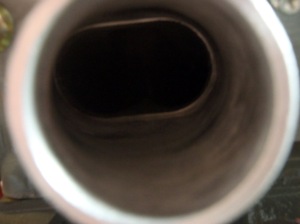 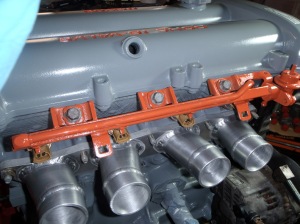 Still on target to get the engine refitted this weekend. I think/hope…