Ok, the car is all back together now.

Most of the time was spent under the scuttle. I fitted the ECU in place of the Mazda unit, but opted for it to go underneath the ECU plate rather than above it. This would prove to be a good decision later. 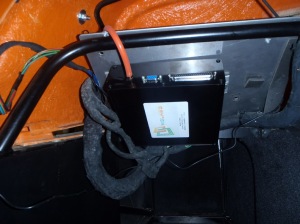 I really hate all these wires from the Mazda loom. Good thing I rarely see them! Would love to create a new loom from scratch, but I’d surely change my mind about that half way through it!

Anyway, I also took the opportunity to mount the Race Technology DL1 data logger I picked up from the Westfield forum a while back. 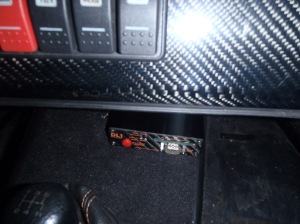 This is just out of reach of the serial cable from the dash, but is the only flat bit in the area so couldn’t get it closer. I’ll pick up a short extension cable at some point.

With everything essentially ready to go, I refitted the silencer and topped the engine up with fluids. Then came the all important engine start.

The first issue was the ECU was still set up for a mk1 CAS rather than the cam/crank sensor combo that I was using. I changed that and still nothing. I was getting a few sync losses so I repositioned the crank sensor a bit closer and that seemed to solve them. Still, no starting though.

I checked with a timing light and whilst that didn’t seem great, it seemed to be in the ball park. This meant I wasn’t getting fuel, or I’d done something impressively wrong with the engine. I preferred the former so pulled off the fuel lines and they were bone dry.

There was a step in the instructions I got that said if the fuel pump doesn’t prime on ignition 2 then you need to change a jumper on the board. I, rather stupidly, ignored this as I’d never heard the fuel pump prime with the Mazda ECU. I removed the megasquirt, glad I’d mounted it underneath, and opened it up.

Sure enough, the jumper (right by the flash) was set to no immobilizer where the donor car had one. I moved the jumper to the appropriate position and reassembled it all.

This time I heard the fuel pump prime on ignition 2… turned the key and after one or two revolutions is started. It was a bit lumpy, but running all the same. I then set the base timing which smoothed it out slightly.

Next was to balance the bodies, and I got stuck. The adjustment screws are seized and it seems no amount of penetration fluid wants to free them up. I wish I’d checked them before they were all assembled as it would have been much easier to fix!

I’ve also got an odd problem where the throttle seems to stick the last 1.5-2%… but only with the engine one. With the engine off it will snap back to 0 no problem. I’m not sure what’s causing this.

Mapping is tomorrow morning. I’ve advised the guy there’s still a bit of debugging to do and he seems happy enough, so fingers crossed!